Stories: The Great Oak of the Kalevala 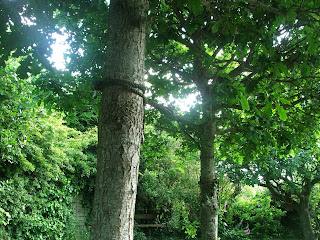 When the world was new, the land was bare, and no trees grew. Old man Vainamoinen called upon the seeds to be sown. All the trees took, except for the one: the hallowed Oak. For three days and nights old man Vainamoinen swore and shouted, frustrated by the seashore, but still the Oak would not grow. Then out of the waves came Turisas, the mighty sea monster. He took some grass of the shore and burned it into ash. And Into the ash he placed an acorn and from that acron a seedling grew.

The seedling waxed and grew, it became the Great Oak. The Oak grew so big that it blocked out the sun & moon, it seized the clouds and winds in their paths. The world became dark, still, void of light. Old man Vainamoinen wondered; Who would be as mighty to cut down the Great Oak? No one could do it, try as they might.

So old man Vainamoinen spoke, called upon mother Nature to send forth many a strong man from the Water Folk. It was then that out of the sea a tiny man came forth, all clad in bronze. With him he had a tiny bronze axe, the head the size of a fingernail and the handle the length of a thumb. Old man Vainamoinen doubted. A single man, so small, could not bring down the Oak so tall, but as soon as he spoke the tiny man had grown large, turned into a giant. With just three blows the giant felled the Great Oak.

So it was that who would break a branch of that tree, would gain luck forever. Who would have the top of that mighty Oak would have an everlasting charm. And who would cut the Great Oak's leaf would get love for ever more.

This story is my translation from the Kalevala. As always with translating, it is also an interpretation.

The bracelet in this post and other Oak leaf inspired jewelry can be found for sale in my Etsy shop.